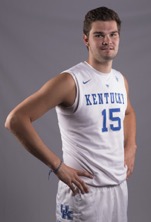 Now 7 feet tall, Cronulla-raised Isaac Humphries was one of our early recipients. He started playing basketball when he was 12 and quickly became a rep player for Sutherland then NSW and Australia. The early commitments for Isaac’s family were significant and the MPF was able to guarantee he could compete and follow a dream that is now very much a reality.

In 2013 Isaac left the shire for the AIS in Canberra and was selected to play at the World Cup in Dubai wearing green and gold. Isaac’s life changed forever due to his outstanding performance at the titles. He broke the all-time record for most points scored at a World Cup including 41 points in the game against Canada. He made the World starting 5 at the tournament and the phones began to ring. Once the USA had him in their sights, Isaac left Australia and accepted a scholarship with La Lumiere High School. He was courted by nearly every major US college after that.

It was the reputation of John Calapari that swayed Isaac to join The University of Kentucky Wildcats in 2015. After a very solid first season, Isaac graced the court in season 2 as part of the starting 5. He appeared in 38 games for the Wildcats in the 2016­–2017 season.

He has taken time to play for Sydney Kings and for FMP Beograd in Serbia. In 2017–2018 he was named NBL Rookie of the Year. Playing for Australia at the 2019 FIBA World Cup, Isaac recorded 17 points and 7 rebounds against Kazakhstan.

Isaac was drafted to the NBA. He appeared in 46 games (34 starts) with Erie Bay Hawks of the NBA G League, then was contracted to the Atlanta Hawks. He signed with Orlando Magic in 2019. Isaac plays weekly in front of 20,000 basketball fans and his life has been one of flying in the college private jet throughout the USA to frequent interviews autograph signings.

Isaac’s workload is intense and training regime enormous and he has created his own destiny.

I know he holds MPF in high regard and remembers those tough times and our timely help. We wish him all the best in the next part of this amazing journey.