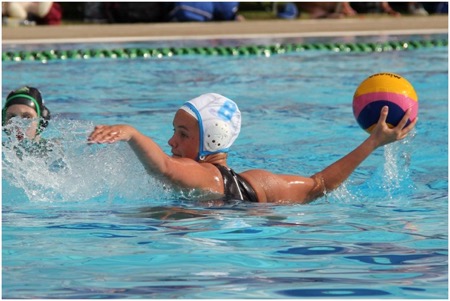 Abbey is very dedicated and focused on her training and determined to achieve her goals in Water Polo. She is also accomplished in martial arts. We are proud of her at MPF, as she has played well above her age category, being selected at the age of twelve firstly in the Under 14 Cronulla Sharks Metro team and most recently selected in the Under 15 NSWCHS team. In 2014 Abbey competed in the State Championships National Championships and then travelled to the NSWCHS U15 Pan Pacific Championships – New Zealand and Regional Tour of Rotorua. Abbey personifies what the Monty Porter Foundation aims to do and that is: assist kids achieve their sporting dreams. Onwards and upwards from here, Abbey.

In March 2015 Abbey played in the Sydney East Open team, victors at the State Championships held in Wagga, and she was the youngest player named in the NSW CHS Open Water polo team to play in the All Schools Championships in March. Not bad for a 13 year old 🙂

Abbey’s Cronulla team won the Under 14 Girls National Club Championship over the Polo Bears in a dramatic penalty shootout. Abbey scored several times and converted her second through a penalty goal in the fourth.  After the score was levelled at 5-5 the game was pushed into a tense shootout. Abbey converted for Cronulla, then goalkeeper Lucy Hull saved the Polo Bears shot. Cronulla converted their remaining shots for a memorable Championship win.

In 2018 Abbey was named in the NSW Institute of Sport Water Polo Women’s Squad.