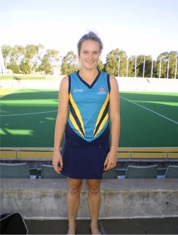 Cara is a local shire girl who represents NSW in Hockey. She has played rep hockey for several years and has numerous accolades attached to her name. These include Hockey Australia Jillaroo squad, NSW selection, Hockey Australia U21 selection and selection in Australian schoolgirls team. Cara has represented NSW in Darwin and played hockey in Germany. She played for NSW in the Australian Hockey League during 2016.

We are proud to be of some financial assistance and wish Cara all the best.